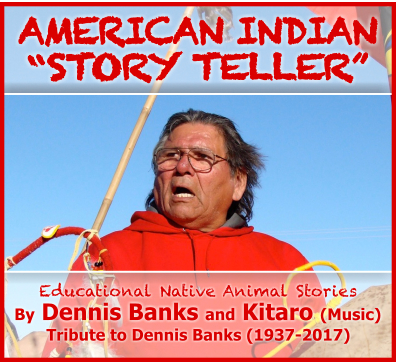 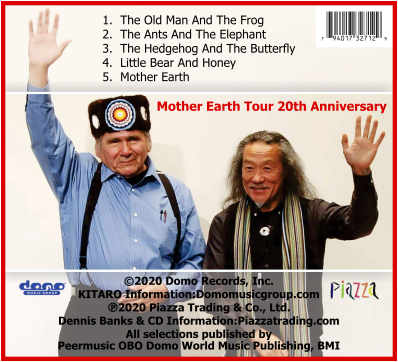 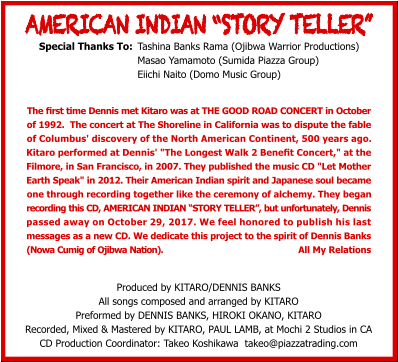 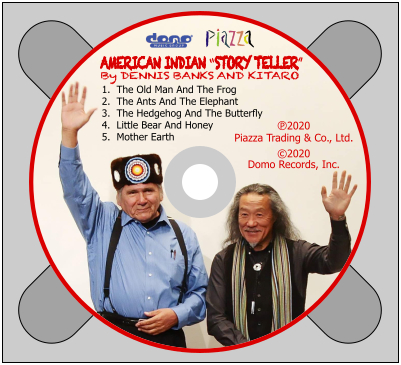 The first time Kitaro met Dennis was in October of 1992 at THE GOOD ROAD CONCERT at Shoreline in Mountain View, California. The concert was against the concept of the Columbus discovery of the North American Continent after 500 years. Kitaro had a performance to help Dennis for The Longest Walk 2 (Continental Walk) Benefit Concert at the Fillmore in San Francisco in 2007. Kitaro and Dennis had been so close that they published the CD “Let Mother Earth Speak” in 2012 together. They began recording Dennis’ Native Animal Stories, but unfortunately Dennis passed away on October 29, 2017.

Now we are happy to publish his last messages as a new CD.

We dedicate this project to the spirit of Dennis Banks!

He was born on April 12, 1937, on the Leech Lake Indian Reservation in northern Minnesota. Ojibwa’s name is “Nowa Cumig,” which means Ïn the Center of Universe”1942-1952(5-15 years old): he was in various boarding schools against his will.

1954-1957(16-19 years old): he served the U.S. Air Force in Japan and was deported because of his Japanese fiance. In 1956, he was influenced by Japanese farmers & monks’ demonstrations against Sunagawa US base in Tokyo.

In 1966, he was convicted of burglary of a grocery store and sentenced to three-and-a-half years in prison, of which he served 31 months.
In July 1968, he and Clyde Bellecourt, with other activists, founded the American Indian Movement(AIM). AIM members participated in the occupation of Alcatraz Island from 1969 to 1971.

In 1972, AIM organized and led the Trail of Broken Treaties caravan across the U. S. to the Bureau of Indian Affairs(BIA) offices in Washington, D.C. Under the leadership of Dennis Banks, AIM led a protest in Custer, South Dakota, in 1973 against murdering an Indian. As a result of his involvement in the 71-day occupation of Wounded Knee, South Dakota, in 1973, and he and Russell Means became famous worldwide through foreign media.

Between 1976 and 1983, he earned an arts degree at the University of California, Davis. He taught at Deganawidah-Quetzecoatl (DQ) University, where he became the first American Indian university chancellor.

In 1978, he and AIM led the Longest Walk, a cross-continental peace walk for the Civil Rights of Native Americans with Japanese Buddhist Monk, Fujii- Guruji. Also, he started the Sacred Run, which is the spiritual running events for Peace & Environmental Wearness all over the world until 2017.

In 1999, he started the American Indian Food business in Leech Lake with the help of Masao Yamamoto (Japanese Eco Businessman). In 2001, he started the Native American Youth Canoe Race(Yamamoto Cup), and the winners were invited to Japan every year until 2011. In 2003, he and Masao Yamamoto established Nowa Cumig Institute(NCI), an educational & cultural NPO. NCI sponsored Yamamoto Cup, Longest Walks, and Mother Earth Tours.

Dennis Banks passed away on October 29, 2017, of pneumonia and complications from open-heart surgery. Over 20 children
survive him.

His Book, CD, and DVD are available 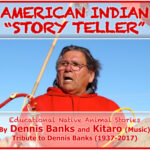